Top tennis players in India-to watch out for in 2018 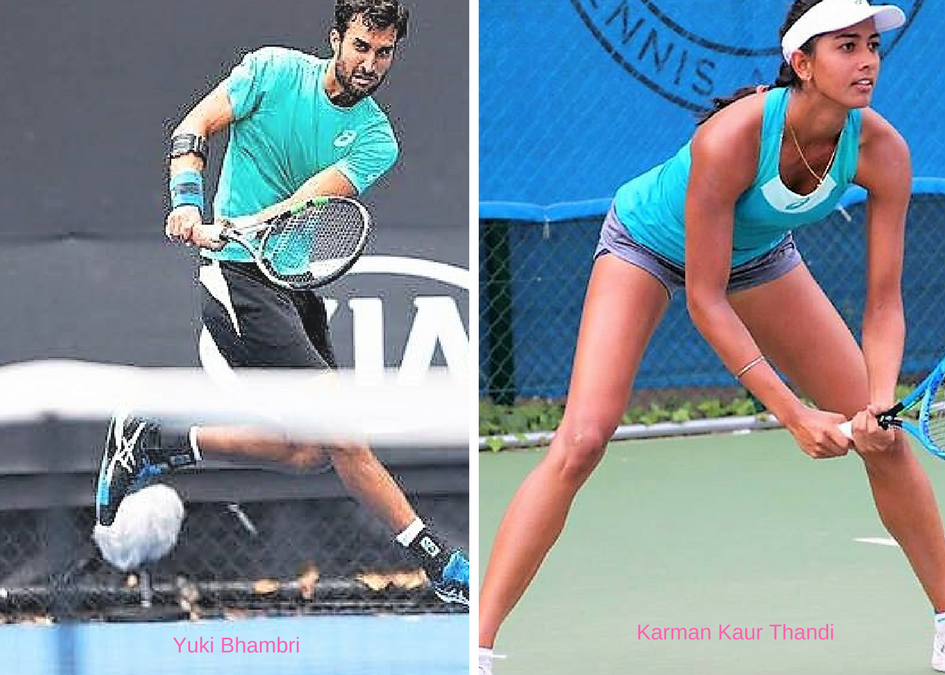 The year 2017 has been quite eventful for Indian tennis. We had a lot of players who made their presence felt. The year 2017 has shown that there are a few players in singles who can shine in 2018 and give India the much needed fillip in singles.

Here is my top picks keeping in consideration factors like form, age and potential.

1. Yuki Bhambri – At the moment in India, nothing can be more satisfying then seeing a fully fit Yuki Bhambri playing tennis. Since reaching his career high ranking of 88 in the year 2015, Yuki had been plagued with injuries keeping him out of the major part of 2016. Thus he started 2017 outside 500 in his ranking but never looked back since then. Much credit has to be given to the introduction of his fitness trainer, Abhimanyu Singh who brought changes in his training sessions and keeping him injury free. After decent performances in the Challengers, he went onto to register the biggest win of his career by beating the defending champion, Gael Monfils in the second round of the ATP 500 Citi Open. Infact he went on to reach the quarter final to lose to the eventual champion, Kevin Anderson in a tight 3 sets. Post that he had a good showing in the 250 series Kremlin Cup where as a qualifier he reached the second round to lose to the eventual champion Damir Dzumhur after he was a break up in the deciding set.

In the year end Indian swing, he won the Pune Challenger and reached the semi final of the Bengaluru Open. Thus he has ended the year at 116 on the ATP. Also I am sure that his off season grind at the Impact Tennis Academy with the No 1 players from 6 countries and a few others will help him come in better shape at the start of the year.

Mission 2018: With a good draw, he can take advantage of the 250 series Maharashtra Open which is now shifted to his favorite city of Pune. Also with the Chennai Challenger happening in Feb`18, we can definitely look forward to him reaching top 100 soon. Assuming he remains injury free, we can possibly see him ending 2018 inside 75 on the ATP.

2. Ramkumar Ramanathan – Even though 2017 has been a lop sided affair for Ramkumar but it still has been his best year. His level of fitness allowed him to play many tournaments to garner points. Among his notable feats is his victory over the then world no 8 Dominic Thiem in the 250 series of the Antalya Open to reach the quarter final. Post that he reached the final of the Winnekta Challenger and Pune Challenger. He has ended the year at 148 on the ATP which is credible.

Mission 2018: Like Yuki he can also take advantage of the Maharashtra Open and the Chennai Challenger to come close to 100 on the ATP. It is time that he digs deep in the Challenger circuit on a consistent basis apart from taking part and doing decently in the 250 series ATP tour. With good showing, we can see Ramkumar ending 2018 in the top 100.

3. Sumit Nagal – The youngster ended the season on an unexpected high. After coming back from injury, he won a few low key ITF tournaments but ended losing first rounds of the Challenger circuits. The only notable performance in the Challenger circuits was against the experienced Mikhail Youzhny in the first round of the Ho Chi Minh Challenger (Vietnam Open) where he lost a winning match. But it was in the year end Bengaluru Open he did the unexpected by winning the title. On the way he accounted for the top seed Blaz Kavcic and Yuki Bhambri. That ended him on a career best of 223 on the ATP. After roping in Yash Pandey as his fitness trainer, he can be seen as giving high priority on his fitness which has been his Achilles heel most of the times.

4. Karman Kaur Thandi – Given her age which is only 19 years and performance, Karman Kaur Thandi is definitely the brightest player in the Women`s singles for India. Throughout the year, she has been consistently reaching quarters, semis and finals of ITF tournaments.Towards the end of the year in the $25K ITF Women’s Tennis Tournament 2017 at Navi Mumbai, she beat the 199 ranked experienced Chinese Jia-Jing Lu in two dominating sets. This win quietly let us know as to what can be expected of her in the new year.

Mission 2018 – With her game and body maturing every passing month, we can expect her to get close to 175 on the WTA this year.

5. Rutuja Bhosale – The comeback player of Indian tennis has struck the right chord by winning the Aurangabad ITF after beating the current National Champion, Mahak Jain. It was also refreshing to see her beat India`s top woman, Ankita Raina in the Pune ITF. After competing her college tennis from Texas A&M University, she has come back to full time professional tennis after a gap of 5 years. This was the same girl who at the age of 15 years became the second youngest winner of the National Championship. To top it all, she was ranked as high as 527 on the WTA at a mere age of 16 years. Now at the age of 21 years, she definitely has come more hungry and take the place she deserves. Currently she has ended the year on a career high of 525 on the WTA.

Mission 2018 – With fire in her belly and wanting to make the most of it, she can be expected to reach close to 300 on the WTA by the end of the year.

6. Pranjala Yadlapalli – To me she is the gentle giant. A quiet girl who just goes on with her business on the tennis court. This 18- year- old from Guntur and currently training at Mahesh Bhupathi Tennis Academy in Bangalore had been one of India`s brightest juniors. She reached her career high junior world ranking of 15 and is now full time on the Women`s circuit. Currently she is ranked at her career high of 482 on the WTA and 2018 is a year she can definitely use as a launching pad to greater success.

7. Ankita Raina – The 24- year- old has been India`s long standing number 1 women`s singles player for many years. It was only recently that she lost the top spot to Karman Kaur Thandi for a week. She reached her career best ranking of 222 on the WTA in 2015 and since then she has been languishing between 250 to 300 range till now. However, this year we saw a physically stronger Ankita who has a stronger frame. Now at 24 years of age, she needs to peak for greater glory in 2018 and move beyond.

Among the young guns, players including the reigning Women`s Fenesta National Champion Mahak Jain and Asian Junior Champion Mihika Yadav, they would do well to improve their game and go up the ranking. In the Men`s section, the injury prone Saketh Sai Myneni might find it difficult with age no more on his side. As for the young talent in the Men`s section, there is a lack of depth in terms of talent. Hard working lads like Siddhart Banthia and Vasisth Cheruku need to up the ante. Also a bit will be expected from Adil Kalyapur who is training at Rafa Nadal Academy.

On behalf of Tennis4India, wishing the entire tennis fraternity of India a Great Year of 2018!