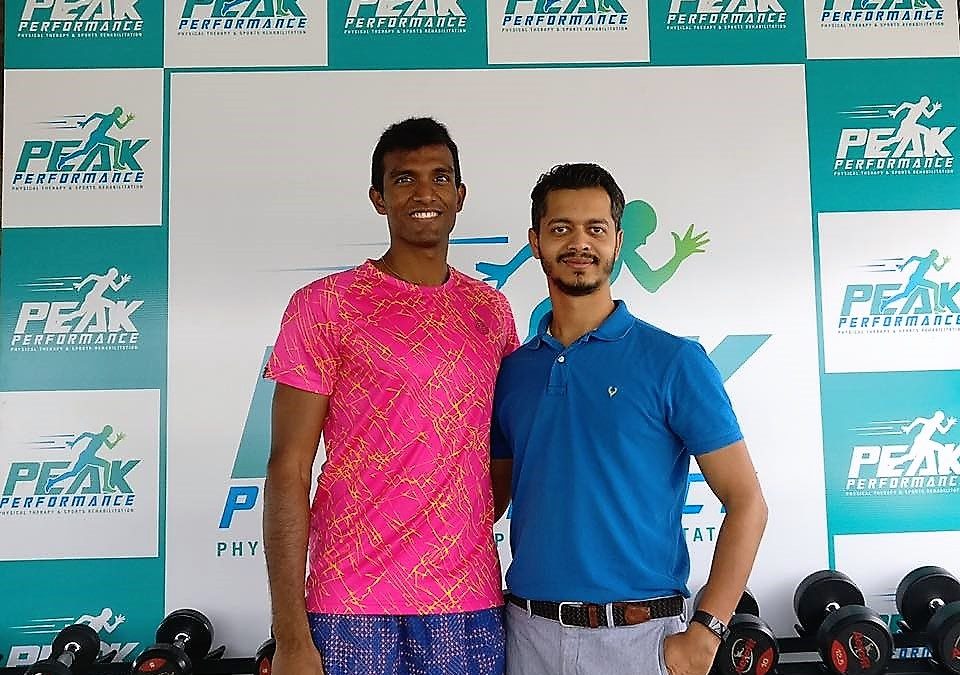 Tennis is a highly physical sport. Apart from tennis skills one needs to be physically on top to handle the pressure of the circuit every week. Thus strength and conditioning training is an equally important aspect for a tennis pro. The wear and tear of the circuit that any tennis pro has to go through often lands the best in the sport out for months in which case proper rehabilitation becomes the order the day.

Peak Performance in Bangalore is a one such destination in Bangalore that is doing a yeoman`s service to current tennis pros and aspiring ones. I caught up with Yash Pandey, its co-founder at his centre who along with his wife, Dipali Pandey are taking care of India`s tennis talents.

ME: Thanks a lot Yash for your time. I was trying to meet you at the Bengaluru Open but you were so busy with Sumit Nagal that I thought better not to disturb you. Also a huge congrats to you for your contribution to Sumit`s unexpected title.

Yash Pandey: Yes it was a crazy week. As you rightly pointed out it was unexpected. We were hoping that even a quarter final showing was going to be difficult but he really did a great job.

ME: So what was the magic potion that you infused?

Yash Pandey: At the Ho Chi Ming Challenger, he nearly beat the experienced Mikhail Youzhny but his body could not take him through. After that he landed straight at Bangalore 10 days before the Pune Challenger. He was practicing at KSLTA and came to Peak Performance for his fitness. Even though he lost in the second round at The Pune Challengers it was in Bangalore that he showed his full potential.

In the second round against Brydan Klein, he was up 5-2 in the deciding set and lost his way before finally winning it 7-5 in  the set. When it was 5-5, I honestly thought he would lose as he was cramping badly. When I attended him for the post match recovery, I could see him writhing in pain and I seriously thought that the next day`s match against the top seed, Blaz Kavcic was not possible. Just to loosen his nerves, we both played cricket in the morning the next day as luckily he had an evening match. But he really played well against Blaz Kavcic and won it in straight sets. What followed up against both Yuki Bhambri in the semi final and Jay Clarke in the final is part of his best showing thus far in the men`s tour.

ME: So what is it regarding his fitness? Even though he played well in all his wins, I could find him short of breadth towards the end of the second sets.

Yash Pandey: See, Sumit`s problem is not a new  one. He has had problem with cramps right from his younger days. Fitness has been an issue with him. Also in Sumit`s case it is often a mental thing. As for his general fitness is concerned, he has to work harder. In fact when he was in Waske University in Germany, he was asked not to do this weight and that weight making him conscious that it might lead to injuries. The fact is that it is because of less training which is leading to his injuries.

ME: How far has India come in terms of sports rehabilitation and sports medicine in general?

Yash Pandey: We have improved but still quite a bit of journey to go. In India if a guy is injured, he is often asked to take complete rest. But rest should be only in terms of only tennis. He has to undergo other forms of recovery training according to his condition.

As for sports medicine in general is concerned there are cases where our top guys` fitness have been compromised. For example, Sriram Balaji was playing with an ankle injury in which he should have been ideally out of tour but the doctor asked him to carry on. When I examined it, I saw that he could not have carried on playing. It was a grade 2 ligament injury of the ankle. After a check up by my recommended doctor, I made him go through a complete rehab at my center.

ME: That is serious. So in the case of Sriram, how did you make him match fit again. Because I saw him moving quite well at The Bengaluru open.

Yash Pandey: It includes an organised schedule. It includes manual therapy mobilizing the ankle joint. There are exercises to make the muscle movements. We made him do stuff like the double leg jump on the bosu ball and a lot of other stuff. Gradually the level of exercises changes as we progress till he becomes match fit.

ME: What about Saketh Myneni? I saw him training alongside Sriram at your center.

Yash Pandey: Saketh has recovered when he joined me and his was more of strength and fitness routines. Also Saketh`s case is different. He picked up tennis quite late around 12 years so obviously started of as a skill based player. So gradually down the line with his strong serve and his overall game he always wanted to keep the points short. It was only when he went to the US on a sports scholarship did he really get into more serious tennis. Also now that he is into his 30s, it becomes all the more difficult for him.

ME:  Now in terms of a guy like say Sumit, how can you and your training help him improve his serve which is not big?

Yash Pandey: In terms of his service technique, it has to be his coach who will guide him. For example, I remember Rohan Bopanna telling me as to how he added some 20km/hr on his serve after one of the foreign coaches suggested to him about his wrist position. But I as a strength and condition trainer can improve on his power. With specific exercises, Sumit can be helped with his muscle contraction. There are exercises that will help his rotatory cuff muscles. Resistance bands using the right position is used for stability of the shoulder joint.

ME: So apart from tennis players who else come to your center?

Yash Pandey: We have players from different sports. We have footballers, golfer and marathon runners. We had for example Pavan Kumar who was the goalkeeper from Bengaluru FC who used to come here. Currently we also have a player from Shillong Lazong who is training here post his recovery from his injury.

ME: So how is your team here?

Also in case of injuries I have my recommended doctors to whom I refer to. Post the report I see what can I possibly do.

ME: It has been a long journey for you. But how did sports physio start, more so specially in terms of tennis? Also how has been your association with tennis so far.

Yash Pandey: Well I did my masters in Sports Injury Management from Sheffield Hallam University, U.K and had a stint with Sheffield United FC Academy.Then in India I worked as a Sports Physiotherapist at Kokilaben Dhirubhai Ambani Hospital. My encounter with tennis started when I worked with Mahesh Bhupathi and Rohan Bopanna. Later on I worked with players like Daniel Nestor, Vasek Pospisil and Rajeev Ram.Then off course I was part of the Davis Cup team. I also travelled with our tennis players for the RIO Olympic team to help them but on an individual capacity. Also going forward I intend  to help Sumit Nagal for about a year starting with the Indian swing in 2018 at the Maharashtra Open and Chennai Challenger.

ME: And how has been your journey with your doubles partner who also happens to be your wife? And what are your future plans?

Yash Pandey: Yes Dipali has been a good partner and it always helps when both are from the same field. She is also a qualified sports physiotherapists and has been part of national level sides like the women`s national football team. Also we are planning to expand our centers in Bangalore and looking to have another branch in North Bangalore where lot of sporting actions in terms of academies are happening.

ME: Thank you so much Yash and it was such a pleasure meeting you. All the best and may you keep taking care of our talented sports people.

Yash Pandey: Thanks a lot Kangkan and it was great meeting you too.