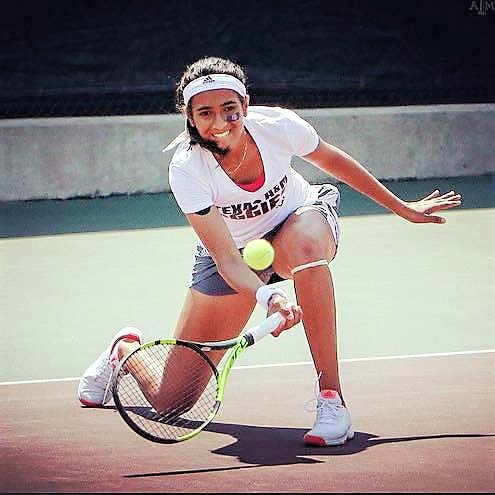 Rutuja Bhosale was seen as one of the brightest tennis youngster in Indian tennis. She burst into the Indian tennis scene by being the second youngest winner in the Women`s National Championship at a mere age of 15 years. By the age of only 16 years, she shoot up to a WTA ranking of 527 which was like a breadth of fresh air in the Indian Women`s tennis. Just when the tennis educated fraternity of India was waiting for her to deliver more, she went into oblivion for 5 long years. In the interim, she completed her degree in business studies from Texas A&M University as her studies took precedence over her professional tennis. She played for her University in the US college tennis where she got exposed to foreign tennis training.

After completing her studies she announced her comeback in June`17 by winning the Aurangabad ITF by beating the reigning National Champion Mahak Jain in the final. It was indeed refreshing to see Rutuja, who is now 21 years old winning a title after 5 long years. Even though she has come back with a bang, debates will keep on doing the rounds if at all it was a good decision for a budding tennis player like her to have lost 5 years of good professional tennis.

With Professional Tennis vs Tennis Scholarship abroad always been a brain teaser for bright tennis players in India, I thought it was prudent to take the opinions from a few important people from the tennis fraternity in the country.

” Rutuja surely must have her reasons to have gone to the US. Circumstances are different for everyone so we cannot generalise her decision. It is purely a personal one.”

On asking her if it was a diplomatic answer and after getting a little bit under her skin, Mihika adds 😊 ,” No I am not being Diplomatic. I do not know why she choose to go to college in the US. So how can I say if it is right or wrong? Tennis is an expensive sport. So most people do choose college to have fully paid training for 4 years. Who are we to comment? They do not tell the truth. Do they?

On further asking Mihika, that assuming the expense was not a problem would she have done the same? To which she was quick to reply, ” No. Why waste 4-5 years if turning pro is what you have decided?”.

Also Read: Mihika Yadav opens up in a lively chat about life on and off the tennis court.

” I think what she did was good. That is the best way forward for Indians as they get stronger in the later years. Players play a lot of matches there and also fulfills the study requirement there. Indian parents are happy with such an arrangement as their kid have all the time to focus fully on tennis and fitness once they finish their study. Now the question is how much money can she spend for the tour. I spoke to her sometime back and she did not have any sponsor”.

He adds, ” I feel players from the west, north of India and the states of AP and Tamil Nadu are still taken good care of. For example, Maharashtra State Lawn Tennis Association (MSLTA) has a good structure for its players. Likewise players from Hyderabad are getting support from private companies. All these things are happening because of the fight between players and AITA committee. I am glad that senior players like Mahesh Bhupathi, Somdev Devvarman and Rohan Bopanna took strong stance against AITA. Hopefully we are moving in a better direction now”.

” For a majority of Indian players, it is better they go to good US colleges if they get an opportunity. This creates a good path for their life ahead.”

As for the promising ones his take is a little bit different ” If I were to tell players who show promise and have the ability to move up the professional circuit, I would say earlier the better to start on the tour. Colleges may not help them in the best manner to work towards realizing their goal as professional players. The tour requires a few years for them to settle down, get the right things around them and then move up the ladder. For example Rutuja had a great potential and I was with her in the Asian Youth Games before she left to the US for her studies. My personal take would be if she had got the right support and continued with her bright start on the tour, I feel she would have been ranked quite high by now. Generally, a player needs 3-4 years to settle down in the tour and a female player would peak around 22 years and stay for there for 2-3 years. Rutuja is 21 years now and coming back to the tour after 4 years. I seriously hope that she reaches her potential and in my opinion, she is capable of of being in  the top 75 on the WTA. But she does not have much time for this and she would need to hurry. I wish her all the best and she can be damn good”.

On further corroborating his opinion he however adds, ” But then at the same time she should have got the support to train abroad and play the tour too. Without support they tend to get blind and are pushed to college even if one does not want to go”

Anjali Parikh`s organisation is the Indian partner of the famed Mouratoglou Tennis Academy. She has the experience of working with aspiring tennis players who go abroad for such college tennis programs.

Anjali says that ” College tennis is definitely a great way to reach goals in professional tennis career. Thus for a girl like Rutuja, she now has an education to back her up after tennis. She has now come back as a more matured individual who can handle other things with a better mind.”

5. Parag Aher (Father of Salsa Aher, one of the top juniors in the country):

He adds an important dimension to the debate, ” How can parents sustain an expenditure of INR 30 lacs annually for their kid who aspires to get into pro circuit? Additionally there is the education cost as well. So if one decides not to do US college tennis then it could be a difficult for everyone including me”.

Author`s take: It all depends on the talent and priority of the aspiring tennis youngster. For an average skilled tennis kid of 16 or 17 year who is still struggling to gain a single point on the WTA or not doing that great even in AITA level tournaments, college tennis in the US could be the right option. Otherwise at the end of 20 years he might find himself nowhere. For a talented tennis player like Rutuja Bhosale it could be a different proposition. For a girl who shows good promise as a 16- year- old and to have ranked decently on the WTA, college tennis might not be the better option. After all,she might end up losing a good 4- 5 years on the tour. As for exposure, it is any day better to be competing against ITF and WTA level players than college level players.

However, it is also to be seen that the AITA, state associations and other important stake holders have to support such players monetarily. A few lucky ones like Karman Kaur Thandi and Sumit Nagal have proved to us that if right talents are nurtured and supported financially then pro circuit is the place to be in.