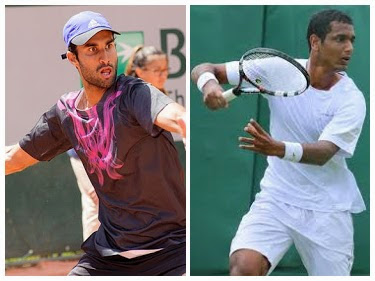 It is after a long time that we find Indian men`s singles finding its feet on the global tennis map. The fact that it is not one but two players at the same time is a huge bonus.

Yuki Bhambri and Ramkumar Ramanathan have been knocking on the door for quite some time but for one reason or the other they could not get the breakthrough. However, in the case Yuki Bhambri he did get the initial breakthroughs but injury hampered his progress each time.

Ramkumar Ramanathan did which many said was the upset of the year by beating the then world no 8 Domonic Thiem and reached the quarter final of the ATP 250 series Antalya Open. It was followed by a final in a Challenger. A couple of days back he scored another milestone by reaching the second round of the Cincinnati Masters where his run was stopped by the rising American Jared Donaldson in a tight 3 sets.

Yuki Bhambri on the other hand after coming back from injury fared well in the Chennai Open at the start of the year. He slowly came back to match fitness and reached the semi-finals of a couple of Challengers. But it was in the ATP 500 Citi Open where he did the unexpected. After qualifying for the main draw, he beat the defending champion Gael Monfils in the second round. What was interesting to see was the way he fought tooth and nail from the baseline against the hard hitting Monfils. At the net, Yuki Bhambri was the more accomplished. It was then followed up by a win against the experienced Guido Pella to reach the quarter final. In the quarter final he gave a very good account of himself to stretch against the inform Kevin Anderson only to lose in a tight 3 sets.

So we hope for some exciting days ahead of Indian singles and let us look at the comparison between the two.