Rutuja Bhosale – The Prodigy Who Is Now Climbing A Bigger Ladder 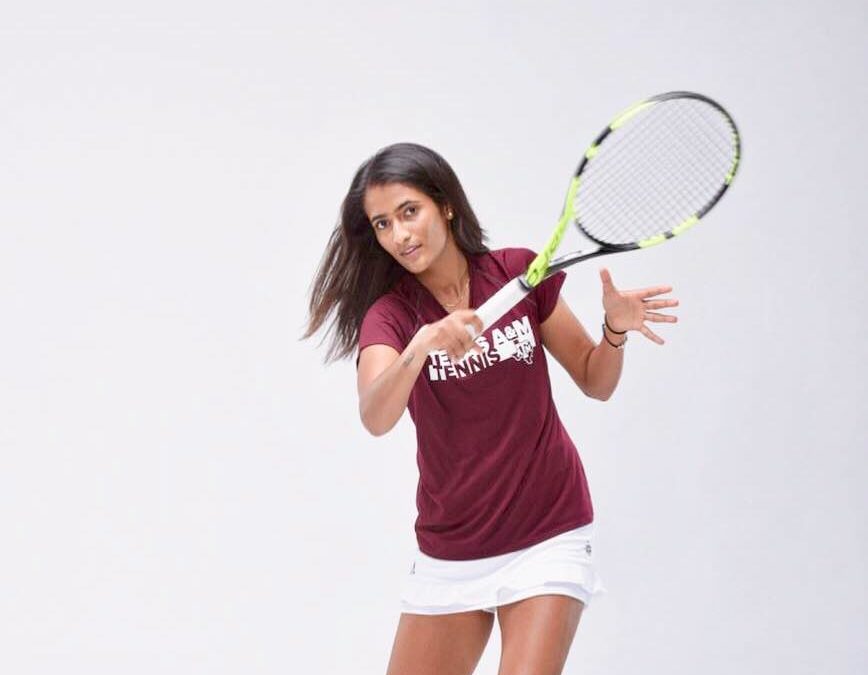 Rutuja Bhosale was once a prodigy who caught the attention of the Indian tennis circuit. After all, at the mere age of 15 years she became the second youngest player to win the Women`s Nationals. The girl who was still supposed to be playing her juniors for three more years was the talking point of Indian women tennis.

Now, seven years later the once little girl is picking up the trades of the professional circuit and getting better with each passing month.

I caught up with Rutuja in Pune as she is undergoing rehabilitation from a shoulder injury.

You were on the brink of victory against Ankita Raina in the first round of the Mumbai Open. As a professional how do you take such a match in your stride? Any learning from the match that you would take?

Rutuja: Ankita and I played a couple of times in the past year and going into the match I knew it  would be tough. I think we both know each other games well as we trained together. As a professional that loss was painful but overall a good learning point on what to do and what not to when I am in that kind of a position again.

Injuries are part and parcel of a tennis professional. Your shoulder has been bothering you for some time and you are recovering. How do you manage to spend your time during such moments apart from the rehab process?

Rutuja: I think I can say I am very used to being injured…joking..Yes, my shoulder has been taking a lot of time off court time but the process never stops. I make sure I spend almost 50 to 60 percent of my time doing my routine stuff. But it also gives me more time to be with my family, one of the things I really miss being on tour.

At a mere age of 15 years you were a Women National Champion which was a huge feat by any standards. You must have been a damn good player as a junior?

Rutuja Bhosale with her Fenesta Women`s National Title as a 15 year old!

Rutuja: I really wish to relive that year. It was one of the best years as a junior and still doing well in the senior circuit. Being a National Champion was so unexpected and it was such a proud moment. I really played well that year. I do not know if I was damn good junior or not though.

After being a prodigy by winning the Women`s Nationals you went to the US for college tennis and missed out on the professional circuit for five years. It must have been a difficult decision to make.

Rutuja: I must say that it was one of the most difficult decisions. I was doing pretty well as I had started playing more on the pro circuit and winning a round at the 125K tournament in Pune. It helped me with the rankings really fast but due to financial and personal reasons my parents and I made that decision. At first I was really upset about it, however it turned out to be a solid decision. I would change nothing regarding it.

What were the factors that you considered when you joined Texas A&M University?

Rutuja during her stint at the Texas A&M University

Rutuja: The main reason was the coach. Mr.Howard Joffe had recruited me and he was really passionate about the sport and loved the team. He wanted all the girls to get better not only at tennis but in all aspects of life. I always knew I wanted to play after graduation, and Texas A & M was a top 10 tennis school and the girls in the team were former top 20 juniors. I wanted to be a part of such a program where it was tough and so it was the right calling for me.

When in India you train in Pune along with the likes of Ankita Raina and Arjun Kadhe. It must be refreshing considering the fact that getting the right hitting partners in India is always a problem for professionals like you?

Rutuja: It is always good to have good players to train with. I trained with Ankita and Arjun and both of them are my good friends and it makes it fun to train with them. However, our schedules were so different as our rankings vary and it was very difficult to catch up together for training. There are a lot of former players who are coaching now in Pune. Also Hemant Sir has been a good coach for me so was Sandeep Kirtane Sir who took care of me during my junior days. So that way Pune has been lucky for me.

What are you short term and long term goals? Also how do you set your goals, for example in terms of winning a few tournaments or reaching certain ranking by these many months?

Rutuja: The main goal I have this year is to stay healthy and not miss out on the competition. I have struggled a lot to be fit and that is the ultimate goal.

I have a certain number planned with my coach which we will try to achieve.

It is a new setting for me and want to make the most of the new team that I have.

What is your training schedule when you are not playing tournaments? Please break it in terms of hours for our young players ?

Rutuja: Right now, I am kind of into my pre-season. I was out for more than 6 weeks so my training schedule has been more fitness based.

One session of fitness in the morning, followed by tennis session and then a break for 2 to 3 hours depending on how much the body is tired and one more session of tennis or fitness.

How strict are you with your diet? What is your diet like?

Rutuja: I am a very conscious eater. I am on a diet all week (My mother takes care of that with the nutritionist) but I do cheat on the weekends. Not a lot but a little.

Who are your favorite sports idols?

Rutuja: Saina Nehwal is my all time favorite.

How do you spend your time during free time? Which is your favorite movie and actors?

Rutuja: I love to sleep and I sleep during my free time without a doubt.

Harry potter(All parts). I even know the dialogues.

Thus as she recovers from her injury she is surely a talent to look forward to for a country hungry for more success on the tennis court.