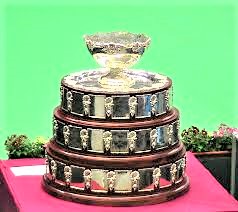 All eyes are set on the big India vs Canada Davis Cup world group play-off tie at Edmonton in Canada. A win here will push India into the World Group.

India`s previous run against teams like Spain and Czech Republic made it difficult on account of two reasons. Apart from the strong teams, our team was also not in the best of form. However against Canada we are in with a real chance. One because Milos Raonic is out with a wrist injury. Also we have both our singles players, Yuki Bhambri and Ramkumar Ramanathan in top form.

Added to it, its other singles player Vasek Pospisil is not in the best of health. That has already made the inexperienced world no 202, Brayden Schnur play the first singles against Ramkumar  Ramanathan. What a chance for Ramkumar to give a lead of 1-0.

However if Milos Raonic is not there, Canada has out of nowhere has seen the unexpected emergence of its teenage sensation, Denis Shapovalov. Denis Shapovalov made the world stand when he beat Del Potro and Rafael Nadal in the Montreal ATP Masters to reach the semi final. This was then followed up by reaching the fourth round of the US Open. On its way he accounted none less than Jo-Wilfred Tsonga. With greater things to come by he is currently ranked 51 on the ATP.

On the Indian side, both Ramkumar Ramanathan and Yuki Bhambri has their personal best showing on the ATP tour. Ramkumar Ramanathan reached the quarter final of the ATP 250 Antalya Open. On his way he beat the then world no 8 Dominic Thiem in what has been billed as the upset of the year. In the Cincinnati ATP Masters he reached the second round to give him the much required exposure on the big stage. Importantly he has also beaten players of the caliber of Dutra Da Silva and Dujan Lajovic to give the much needed confidence. Yuki Bhambri to his credit has done no less leading up to the Davis Cup tie. In the ATP Citi Open, he did the unthinkable by beating the defending champion Gael Monfils. This was followed up with a win over the experienced Guido Pella. In the quarters he gave a very good account of himself against the US Open finalist Kevin Anderson in 3 tight sets.

The fact that India stands a good chance to win at least 2 singles tie makes the doubles tie very crucial. The Indian pair of Rohan Bopanna and Purav Raja will  be up against the experienced pair of Daniel Nestor and Vasek Pospisil. Form and fitness is with the Indians. Rohan Bopanna has just won his first Grand Slam in Paris. Also Purav Raja has been very active with a few good wins. On the other side of the net Canada has the ageing 45year old Daniel Nestor and the injury plagued Vasek Pospisil.

Come tomorrow and we will have the whole of India cheering out team.