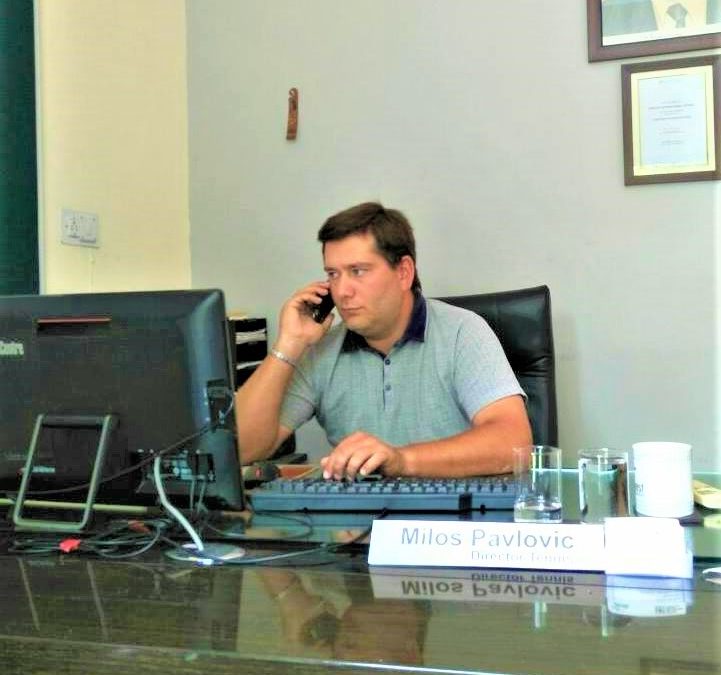 In Conversation with Milos Pavlovic, Director of Harvest Tennis Academy.

When it comes to tennis academies in India, Harvest Tennis Academy always take the top of the mind share. With 14 floodlit courts and other top notch facilities of a gym, sauna, steam, swimming pool etc, it indeed has to be India`s leading modern tennis infrastructure.

Added to it it has some of the finest international coaches and players. At the helm of affairs is the Serbian, Milos Pavlovic who is the director of the academy. An ITF certified coach of the highest level, he is also personally in charge of the academies leading players, Dalwinder Singh and Suraj R Prabodh.

As I was seating beside Milos at the Bengaluru Open 2017, he was constantly engaging in conversation with Dalwinder Singh, keeping him upbeat before his first round match. An hour back, his other ward Suraj Prabodh had given  a good account of himself against the the world no 144, Elias Ymer in a tight two sets.

In the ensuing match, Dalwinder Singh was fighting tooth and nail against his experienced French opponent raining down some bazooka serves. Even though he lost the match, it gave enough indication that given more exposure, these young guns from Harvest Tennis Academy can really do well in future.

My love interest for Harvest Tennis Academy stayed on as I again caught up with Milos Pavlovic after a couple of weeks to know more.

ME: Milos, thanks for your time again. I believe your wards put up a pretty good show, given that they were up against much more experienced opponents?

Miols Pavlovic: Thanks a lot. They gave their maximum effort today and I appreciate that. Sometimes that is not enough to beat players at this level. But at least they the opportunity to play there. They will continue to work hard and I am sure they will get better and better.

ME: Dalwinder displayed a strong game and his service is strong. I was surprised Dalwinder cranking up 195 km/hr on the speed gun.

ME: I mean 220km/hr is very much unindian. I mean we have Rohan Bopanna who sometimes hit 215km/hr which is big for us.

ME: You mean a guy serving at 220km/hr is not strong ☹ (as I asked him curiously)

Milos Pavlovic: No I am not meaning that. What I meant was in the past he was getting injured in his arm and back.

ME: What is your take on Suraj R Prabodh? When I met him, he seems to be enjoying the academy and his coaches.

Milos Pavlovic: Suraj is different. Off course he does not serve as big as Dalwinder. Suraj has a good aggressive forehand but he is not doing enough with that. Also he needs to use more volleys and bigger serves. We are now making a program for him. He is one guy who needs more cheering. His next target is to get inside top 600 on the ATP. We need to take it step by step.

ME: You mean to say you will be having special strategic program for him?

Milos Pavlovic: That is right. In that we can see as to how he can use his serve in different ways. He also needs to use his volleys. Sometimes he plays matches without volleys. Overall he is a player who can do much better and I am sure he will do better. Also he had been playing mostly tournaments so I could not focus on him. Now I am putting a proper plan for him  along with his fitness coach.

ME: Now coming to you, how has been  your stay in India? Hope you are enjoying it?

Milos Pavlovic: Well it is not easy. I have been here for more than four years now and am used to it now.

ME: You are from the land of the great Novak Djokovic. Well he is one of my favorites.

ME: Tell me honestly. What is that Serbia has that we do not have?

Milos Pavlovic: Look, we are a very small country and the capital is Belgrade. So all good players are coming there for training when they are 14-15  years. That makes life easier and more productive for everyone.

Milos Pavlovic: That is very important. I mean you have very good kids here but they are not working together. Also the big problem is lack of good coaches. When they reach to some level, they are happy and they do not want to improve more.

ME: How about work ethic wise. Say maybe in terms of hours our kids train or practice compared to Serbian kids.

Milos Pavlovic: Look, Serbian kids play less tennis than here. Burt when they are court, they are giving their maximum. So, instead of playing 5-6 hours and giving only 50 percent it is better to play 2 hours with full intensity. Also it is very important to have cooperation between  clubs and coaches. Here you do not have that. Also, we are a sports nation. Even Serbia with that small size has qualified for the World Cup football this time. Also we have been European runners up in basketball this season. Earlier in Serbia it was difficult to find sponsors but now companies and the country invest in sports more.

ME: Sumit Nagal`s former coach, Mariano Delfino told me that in India one factor that hampers tennis growth of our players is the climate. He was of the opinion that playing 5-6 hours of tennis in India is not possible.

Milos Pavlovic: But you have to organize everything. Locations are important because of weather. That way Bangalore for example have one of the best conditions to play tennis.

ME: So any other players that you have to take immediate note of.

Milos Pavlovic: We have another player Hardeep Singh Sandhu. He was around 1200 on the ATP before he lost points on the ATP. We are now trying to put him back in the right path. But he is going to the US now. We have a very good team  of juniors. There is Jaishvin Sidana who represented India last year in the under 14 world cup Asian zone in Qatar. Yes the future is good but we need to do more.

ME: Thank you so much Milos. It was great chatting with you and get such great insights from you.

Milos Pavlovic: Thanks to you too man.