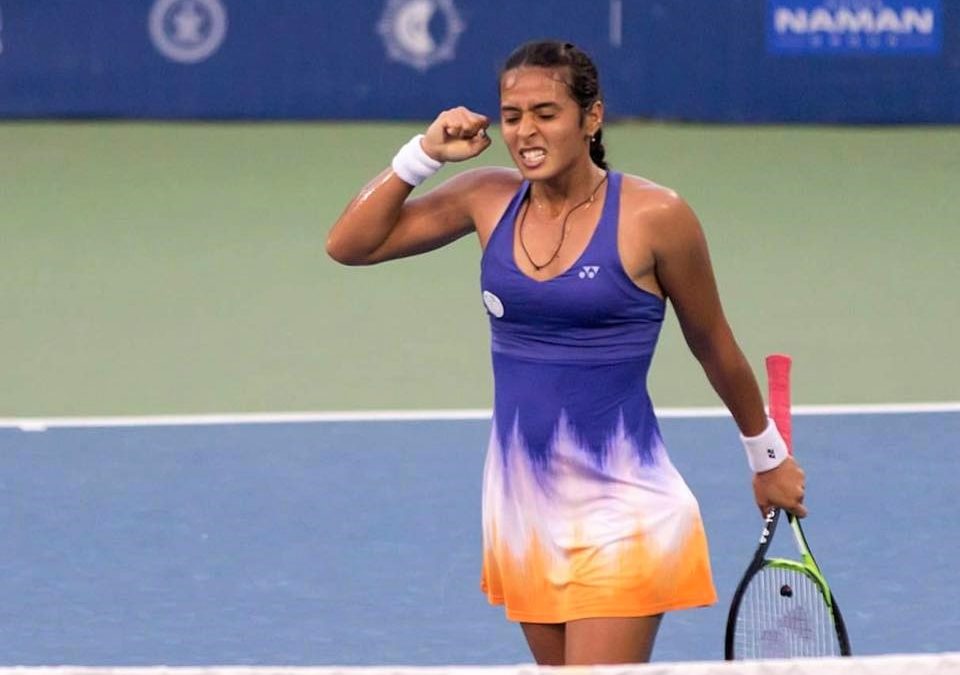 Indian women`s singles has been on the weaker front compared to its Men`s singles. After Sania Mirza stopped her successful singles journey after her wrist injury, there had been a big lull. Even though Sania`s shoes are big to be filled so easily, it has been Ankita Raina who has carried India`s Women`n singles flag for quite sometime now. Since then she has been consistently No.1 player in the country except for a brief period of 1 week when Karman Kaur Thandi took that coveted position.

Early Start – She picked up her first tennis racquet at the mere age of 4 years on grass courts. Old habits die hard as this early habit still makes grass her favorite surface even though there are hardly any grass court tournaments left.

Big Impact – Her move to PYC Hindu Gymkhana in 2007 was a turning point to the way she started taking up tennis more seriously. She trained under Hemant Bendrey who has had a lasting impact on her career.

Stronger Ankita – She has put more emphasis on her physical conditioning and is more stronger. She has stronger legs now as she has  been working on the physical aspect quite a bit.

Sponsors – She is sponsored by Sports Authority of Gujarat and Yonex. She is employed with ONGC. Still it is not enough as she travels without a travelling coach and a fitness trainer. In the modern day game of wear and tear of body because of the highly demanding professional tennis circuit a player need both.

No wonder the country`s top singles player was miffed when she was omitted from the TOPS (Target Olympic Podium Scheme) list. After her Fed Cup wins against all her 4 opponents she said ” I let my racquet do the talking” at an apparent jibe against the omission.

Indeed she has let her beautiful Yonex racquet do the talking that has been with her for quite sometime.

The Sticky Ranking – After reaching her career high ranking of 222 on the WTA in the early part of 2015, she has been hovering between 250 to 300 on the WTA since then. Part of the reason is also attributed to her playing in the tougher European circuit rather than the Asian circuit. However, as things stand we are seeing a stronger Ankita than before because of the tougher path that she encountered.

Game For Doubles – Singles has always been Ankita`s priority but she does have a steady doubles partner in Emily Webley-Smith from the UK with whom she gels very well. She is Ankita`s best buddy on the tour.

Resurgence – The Fed Cup 2018 held in New Delhi saw a resurgent Ankita. She not only won all her 4 singles matches against China, Kazakastha, Hong Kong and Chinese Taipei but also beat quality players ranked much higher than her. She beat the world no. 81 Yulia Putintseva from Kazakasthan and world no. 121 Lin Zhu from China on her way to keep alive India`s chances.

No flash in the pan – After her tremendous performance she put up a spirited fight against former world no.4 and current world.no 44 Samantha Stosur from Australia in the prestigious Dubai Duty Free Tennis Championship. In the first round of qualifying even though she lost 6-4, 6-4 she showed that she has a new  found confidence in her game. In fact in  the second set Ankita was up 2-0 up and also had other break chances. It looks like 2018 could be the turning point of her career.

Author`s Take – We are expecting bigger things to come Ankita Raina`s way on the tennis court. It is quite prudent to think that she comes closer to around 175 on the WTA soon. From there on  she can only get better. Having said so, she needs at least a full time travelling trainer as she moves up the more difficult rungs of the ladder.