He burst into the scene as the junior Australian Open champion but his promising men`s journey has always been hampered by one injury or the other. While he reached his career highest ranking of 88 on the ATP in 2015, he had not been able to play even a single full season.

However 2017 is a standout season for one special reason. As he completes the year with the ongoing Bangalore Challenger, he is about to complete one full healthy season.

The sudden turnaround in Yuki`s new found fitness is widely credited to his one year old fitness trainer, Abhimanyu Singh.

I caught up with Abhimanyu Singh from the stands of The Bengaluru Open 2017 where Yuki was playing against his second round Spanish rival, Pedro Martinez Portero.

ME: First of all thanks to you Abhimanyu for Yuki`s latest fitness turnaround. We all are thankful to you for bringing back our No.1 player back in  business.

Abhimanyu: Well I am just doing my bit. I am happy that I can contribute to his success.

ME: Yesterday we saw him taking a medical time out in the first round. Hope he is fine?

Abhimanyu: He is fine. Just a slight niggle and that was it.

ME: How is his body now? Poor guy he has not not been able to give one full season of tennis to himself. How is his elbow now as he is still wearing that strap.

Abhimanyu: Yes, he is fit now. Injuries are part of a tennis player but importantly one has to recover fast and well. In Yuki`s case he was given a lot of different advice by different doctors and I guess that was his undoing.

"Come on Yuks come onnn. Chaal abhi", an excited Abhimanyu peps up Yuki in between as Yuki is a break point down... 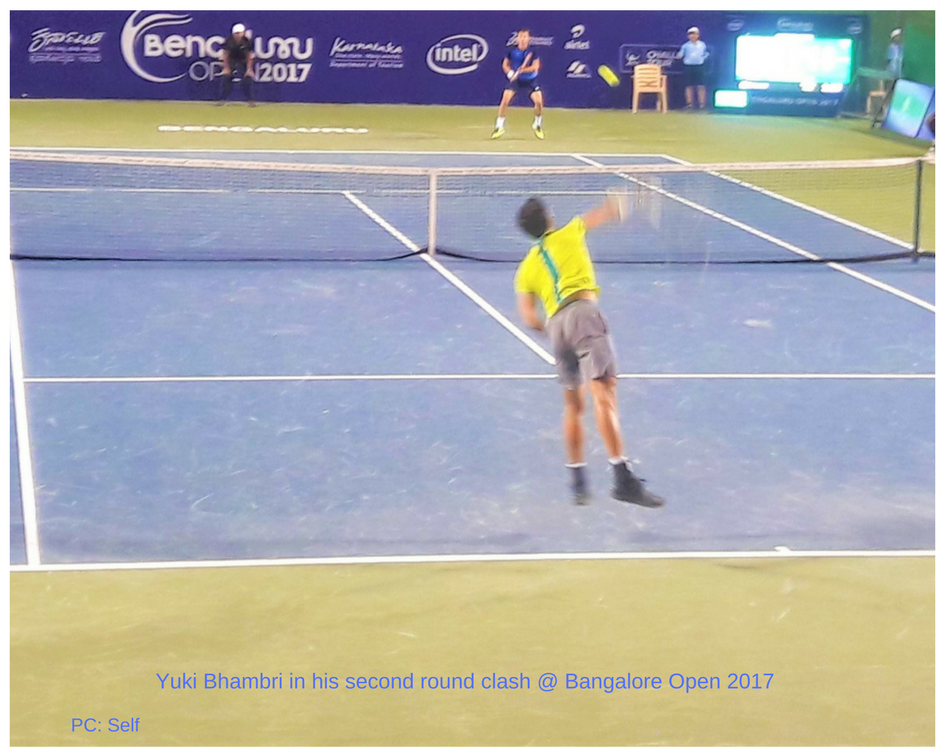 ME: So how did the tennis journey started? How long has it been now?

Abhimanyu: Well it has been quite old now. Now I am with the AITA thus accompanying the Davis Cup team on a regular basis. I first worked with the DLTA when they had some requirement and it all started like that. Before that I was pursuing my own sport discipline of javelin and martial arts.

Also I am working with a few ex professional player turned coaches like Vishal Uppal, Vivek Shoken and Saurabh Singh who coaches in  academies. Thus I am  working with a few upcoming players like Tanisha Kashyap. So everyday is a new learning for me having to train  players of different age groups and talent.

ME: Apart from tennis players you also work with others?

Abhimanyu: Yes a few. For example I also work sparsely with our golfer, Shiv Kapur. Whenever he is in Delhi he calls me up and I help him with his strength, conditioning and fitness. You might be surprised that golfers need to have fit body apart from a fresh mind to be on top of their game.

ME: So how often do you travel with Yuki?

Abhimanyu: I have been travelling with him quite a lot even though not always. I have travelled with him at the Citi Open where he reached the quarter finals. Also I travelled with him for the Asian leg of challengers. In between for a couple of months I was in UK for a Physio course during which time I could not travel. Even though I myself have been suffering from some neuro issues but I try my best to be with him for most of the times.

ME: You have handled Somdev before. How different is Yuki?

Abhimanyu: Both are different individuals with unique abilities. So it will be wrong to compare them. It is important to spend time with the players and learn about them before laying out the plan.

ME: Do you think that Yuki needs to have a stronger serve?

Abhimanyu: Well I am not a tennis coach so I will not comment on his serve (as Abhimanyu carefully handles the often asked question 😊). But I guess he is an intelligent server as he places the ball quite well.

ME: So any future plans that you might have?

As we just finish talking, Yuki pumps his fist into our direction confirming his advance into the quarter final and Abhimanyu acknowledges it. Abhimanyu and myself quickly take a selfie to rejoice the moment.

After a quick exchange of parting goodbyes, Abhimanyu runs down the stairs as he need to run Yuki through his post match recovery.