At the age of 44 years, most professional players hang up their boots for many valid reasons. At that age even if the spirit is high but the body is not. This is all the more relevant in a sport like tennis which is highly demanding and mentally draining. However there are people who love to do things that are not normal. One such player is Nitin Kirtane who has defied age and norms to be still playing the sport and competing against players less than half his age in the country.

The Punekar who along with his brother, Sandeep Kirtane were better known as “Kirtane Brothers” formed one of the most formidable doubles combinations in the country. He also had the distinction of reaching the junior doubles finals at the Wimbledon pairing with Mahesh Bhupathi.

I caught up with this 44 years old young man after he sweated out another day of training in Pune.

ME:  You are 44 years old now. How is it that you are still motivating yourself to still get up early in the morning and going through the grind. A lot of our youngsters will indeed be motivated by your story.

Nitin Kirtane: Age is just a number for me.My motivating factor is my love and passion for the game which I have been playing for the past 39 years. I still follow a very tough routine on my body which means I still think and work like a professional. My daily fitness starts at 6 am under the watchful guidance of Mihir Teranikar at TF Fitness Centre. The biggest advantage of this is that I train with youngsters so I have to match them and that pushes me to the limit while training. I will be playing 2 matches daily so I have to stay fit and recover the next day again. I also undergo kickboxing training under my trainer, Tanish S which has helped me improve my reflexes .There are many days when I am very tired but I keep pushing myself as I still play to win. I do not want to compete on the tour just to make up the numbers .

Yes I want our junior players to do well on the tour and if a veteran can be a motivating factor for them then it gives me added pleasure .

ME: You are still competing at various National and AITA level tournaments. When you go into any tournament, what is your approach? I mean do you do it for the sheer passion of it or the sheer desire to still win.

Nitin Kirtane: I am currently employed with Central Railways in the Pune division.I am actively playing at the AITA and ITF circuits.My approach is simple, PLAY TO WIN . I try my best to go into any tournament well prepared .I still have that same passion and hunger which I had 20 years ago.The competitive spirit pushes me to the limit.There are times when I lose in the early rounds but that does not stop my hard work on and off the court.

Nitin Kirtane: I am currently training with Hemant Bendre Tennis Centre(HBTC). His group consists of quality players like Arjun Kadhe, Ankita Raina and Rutuja Bhosale. Morning fitness starts at 6 am followed by tennis practice for 3 hours followed by the gym. Sometimes, I play in the evening also with set practice. 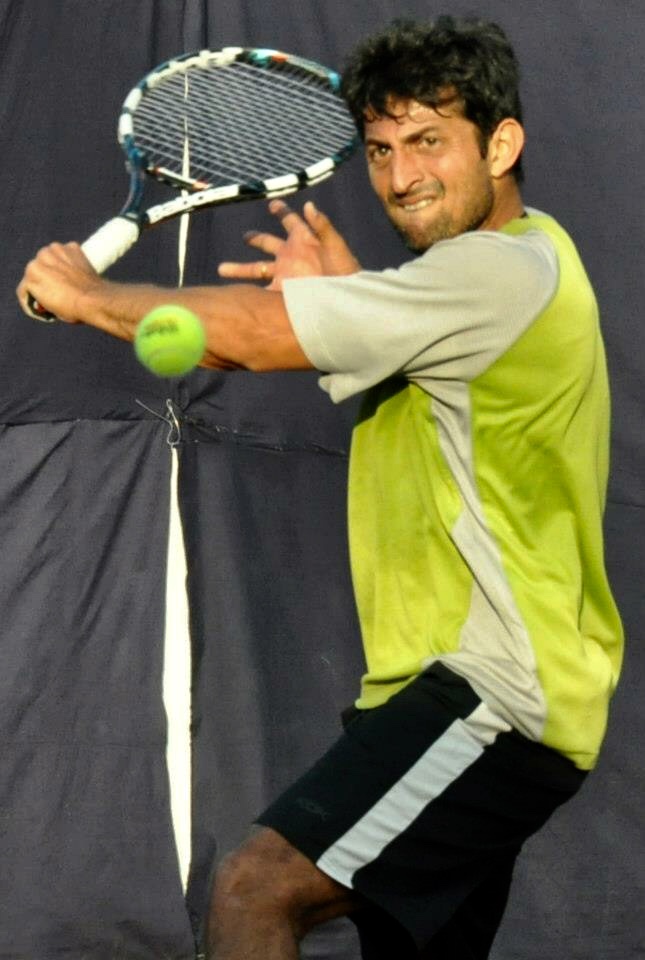 ME: With your age, it might take longer for your body to recover? In such a case how do you manage your body?

Nitin Kirtane: Age is an important factor and good recovery is equally important if I have to compete against younger players. Thus to my rigorous schedule I try to keep fit. Lot of days when I am physically exhausted I still stay on the court so as to not miss my tennis practice. Having said so, my main worry is recovery and I follow good recovery therapies like massages and physiotherapy.

ME: You have achieved quite a bit in your own rights. However, since you were a Junior doubles finalist along with Mahesh Bhupathi in the 1992 Wimbledon, do you feel that you could  have done more in your international career?

Nitin Kirtane: I still feel I have goals to achieve in my tennis career. As a junior we had goals to achieve and I always gave myself targets. Fortunately I remained injury free other than the horrific road accident in 2005 and achilles tendon surgery few years later.

I felt I played less on the ATP tour as tennis is a very expensive sport. There was lack of corporate sponsorship that I needed the most to improve my ranking on the tour. My cousin Sandeep and I were the second best team after Lee Hesh but we could not play more events abroad due to lack of funds. If supported we could have done very well in the circuit.

ME: People knew you and Sandeep Kirtane as the Kirtane Brothers during your peak times. You both must have had a great bonding together.

Nitin Kirtane: Sandeep and I had a great bonding together. Being a left and right combination it was very difficult to beat us. If I was very quick at the net with my volleys, Sandeep had a great return of serve. So we did well on tour. We understood each other`s  games well which led to us doing very well on the National and International circuit.

ME: Sandeep is into coaching now but you are still playing. Will you consider coaching in the near future?

Nitin Kirtane: Sandeep went into coaching early and has produced many players who are doing well in the circuit. My fitness and some other goals are the main reason as to deciding when to start coaching full time. Like all pros I will also follow the same dream of producing National Champions who go on to shine in the International tour.

ME: Asian Games is currently on. You were part of India`s Bronze medal winning team in 1998. Does it still give goosebumps to you thinking about the moment standing on the podium? Share a few experiences of the event.

Nitin Kirtane: Winning a medal for the country is a dream for any sportsman. Yes I still get goosebumps when I remember the time I stood on the podium at the 1998 Asian Games in Bangkok ,Thailand. In fact, going into the Games I was the fifth member but Leander pulled out of the team and I got into the main team.

In the Men`s Doubles Vijay Kannan and I lost in the quarter final to miss out on the medal.

ME: What do you have to say about the current crop of Indian players?

Nitin Kirtane: We have a very good crop of youngsters like Yuki, Ramkumar, Prajnesh and Sumit who are doing well in the Singles circuit and Rohan, Jeevan, Bala, Vishnu, Purav and Divij playing well in the doubles circuit. In the women`s circuit we have Ankita, Karman, Rutuja, Prarthana doing well. My worry is the next gen players. We need a solid junior program if we want to produce top 100 players. We must remember that there are more than 200 countries playing Tennis .

ME: You have seen tennis change so much over the years. How do you find the transition from the Sampras-Agassi era to the current Federer- Nadal-Novak era?

Nitin Kirtane: Tennis has changed over the years from the Sampras/Agassi era to Federer/ Nadal/ Novak/ Murray era, due to more powerful rackets. Also more importantly because of new ultra modern fitness and Bio Mechanics, players are more stronger and fitter with players hitting a 200 Kms per hour serve regularly. A player has to have a big weapon to survive on the tour now and most players are over 6 feet tall. There is hardly any difference between players except the ones who play the big points well.

ME: Do you have any immediate goals that you intend to pursue?

Nitin Kirtane: Yes I am concentrating on the ITF Senior Tour and hope to do well in the upcoming World Senior Event in October/November. Next year I hope to play on the new ITF Transition tour also .

ME: Thank you so much Nitin for your time. It was a different kind of a feeling meeting someone who has defied conventional thinking and gone beyond the normal. Thanks again and keep on getting younger.

Nitin: Thanks to you too, Kangkan. It is always great to meet someone who cares about Indian tennis.