Adil Kalyanpur is one of India`s top hopes for the future. The 6 feet 3 inch tall 18 -Year- Old Bangalorean had been a consistent top junior in India before he moved to the Rafa Nadal Academy where he has been doing the residential training for the last few years.

He was here in Bangalore for a mini break where I caught up with him for an extremely free wheeling chat. One can make out for the interview that he is an extremely positive, bubbly youngster with a clear vision to succeed.

ME: You are now full time into the circuit? How is the feeling and how is it going?

Adil: It has been a challenging last couple of months having made the transition into the men’s circuit. There have been some major ups and downs but overall the shift has been positive. It feels great to be competing against various highly ranked ATP players as there are so many learnings and experiences to be taken away from each match. So far my ranking has improved quite a bit but I have set some higher goals that I would like to achieve and I am working hard towards making them possible.

ME: You spent your earlier years in India and also was one of the the top juniors in the country. Then you moved to Rafa Nadal Academy. How did the entire thought process go through? I am sure you had done your thorough research before making the move?

Adil: Yes before moving to Spain I was training in Delhi with Vishal Uppal and things were going pretty well. In August 2016, I decided to find a place in Europe to train and settle down after playing the masters of the rendezvous to Roland Garros and had tough losses there. It was during this tournament that my team and I realized that there was so much more that I needed to improve to compete with the best in the world and the first step was to get out of the AITA circuit. We made this decision primarily because we felt that there was a lot more Europe could offer that India could not. Now, being a patriotic Indian lover, I did not want to believe that. But over time I started to understand that to create a #MadeInIndia Champion, we need to adopt some of the tennis life from Europe. A few of which being more quality players in a single city, more tips from various coaches, easier access to more tournaments etc.

The rising pollution levels in Delhi also played a massive role in making this decision. The first Academy I decided to visit was the Rafa Nadal Academy mainly because it had just opened and there were a lot of advertisements for it at the time. I met Mr. Carlos Costa at Roland Garros and he explain to me what the Academy can offer. So I decided to go and try it out for two weeks to see if it was a place I could see myself settling down in. Within the first week, I felt that the training had a good mix of intensity, drive and focused drills and so my gut told me that that was the place for me. It was during this time that I got to practice with Rafa and got offered the 3 year agency contract with Mr. Carlos Costa and his company so it all worked out for the best. 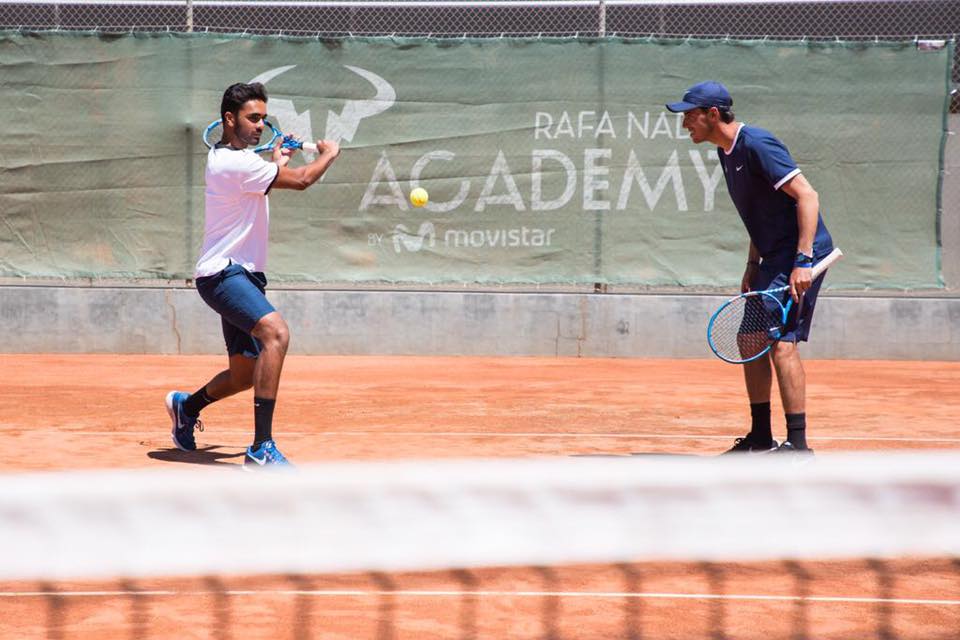 ME: So how is the training going?  How much has it helped you in your game?

Adil: When I started off at the academy, it took quite a lot of time for me to get acquainted with the coaches, trainers and physio. Initially the language was a huge barrier as well and the expectation to perform was in my head. It took a few months for all this to settle down and for the coaches to understand my game and for me to adapt to the European clay courts and way of living. All is well now and I have a very good bond with all the staff here and the players and really enjoy spending time on this beautiful island.

So far, the training has been going really well and I feel like my game has improved at each level. There is still a long way to go and a process that needs to be followed but I have got a great team helping me out here and together we are working hard to make it to the big stage.

ME: So how does it feel to handle the big booming forehands from Rafa when you often get to hit with him😊?

Adil: Every time I hit with Rafa I am told at least a day in advance so I have time to prepare. I do visualization on a consistent basis but generally the day before practicing with Rafa, I modify my routine to focus more on ‘time & perception’.  The most challenging thing when practicing with him is not just the intensity and power with which the ball comes to you but is actually the fact that he does it every single shot and every single rally. His intensity does not drop at all during the entire two and half hours of training and that shows why he is one of the greatest players of all time. Apart from being super humble, he is quite a funny guy and so conversations with him are never boring.

ME: You have been playing mostly in the Spanish circuit. I am sure it has exposed you to a much tougher bunch of players and improved you as a player?

Adil: Yes, when I chose to train in Spain I practically signed up to play tournaments mostly in Europe. There is no doubt that the level is much higher here and you need to put so many more balls in the court to win a point. The Spanish mentality is to play tougher and higher level of tournaments because that is the only way you will improve your game. Since I am still at the building phase in my career, my coaches and I believe that is very crucial to keep pushing the boundaries and improving my game by playing tougher and higher level opponents. Because of this, my ranking (both juniors and ATP) has suffered quite a bit in the last two years but we do not see that as a problem since the focus is in the long term. At this point, the goal is to stay fit and injury free while constantly building all aspects of my game, because as time goes on and the experiences come flowing in, with strong belief and the right mind set, the success WILL come.

ME: How and when did you first start playing tennis? In a family where both your parents were accomplished doctors, how did you make that move? How had been the support from a family which is in a totally different field?

Adil: I started playing tennis when I was 5 and half years old. There was a tennis club near my house and my parents were looking for a sport that would keep my sister and me active during the summer so it worked out perfectly. When the summer ended and it was time to hang up the two month old “Cosco racket”, I threw a huge fit. I didn’t want to stop playing and apparently (according to my parents) I claimed that I would not eat until I got back on to the tennis court. They knew I had a passion for the sport and being the extremely supportive parents they are, they let me continue taking the classes. My first coach Rajini sir was truly inspiring and is probably the reason that I am still playing tennis today. He saw that I had the potential and told my parents who willingly agreed to take me to more sessions regularly. One thing led to another and soon I started competing and then winning. When I lifted my first ever trophy, I knew that this is what I wanted to do.

My parents and sister have been extremely supportive since day one. They have mostly learnt everything about tennis on the job while travelling with me etc and I have to say they make pretty solid tennis coaches when called for. However, with two doctors and one future doctor in the house, things can get a bit funny sometimes.

For example; at the dining table, there will be a serious discussion about pediatric cardiology or radiology or something, and I will just interrupt everyone ecstatically and whip out “I hit a tweener winner in practice today!” 😊

ME: You are only 18 years now and still has a long career ahead of you. How do you plan your future? What are your short term and long term goals?

Adil: My team and I figure out a plan together and schedule the tournaments accordingly. My goal for the moment is to break into the top 600 and start playing the Challenger tour more often. The long term goal is to crack in to the top 10 in the world and win a Davis cup title for India. I like to dream big and believe in my potential because where there is a will, there is a way.

ME: Tell us about your typical day of training at the academy? And how about your diet?

Regarding the diet, Rafa’s nutritionist looks after all the meals at the academy and they are extremely healthy and well-taken care of. I also work with Ryan Fernando at Qua Nutrition and he is the one that really helped me reach a height of 6’3. I like testing out different things so I recently started a gluten-free diet to see how my body reacts to it. So far it has been going really well so I will take a call in another month or so whether to make this diet permanent or not.

ME: Who are your role models?

Adil: I definitely look up to Rafa mainly because I see how hard he works and how humble he is about all his success. The cricket player, Robin Utthapa, has been a huge motivator to me as well and has given me so many words of wisdom for which I am really grateful.

ME: Have you picked up a bit of Spanish by now? How do you spend your off time in Spain?

Well, since Mallorca is famous for its beaches, most of my free time is spent there with a book and just soaking in the vibes. I am a mini entrepreneur and in the process of starting my own company on the side. But it is going to be a while before it takes off. I have just begun my work on getting a college degree which might be quite time consuming but education is important. Otherwise, my hobbies are mostly playing ping pong, magic tricks, Netflix, yoga and meditation.

ME: What is your favorite cheat food?

Adil: I have a weakness for the Domino’s Choco lava cake and find it absolutely irresistible.

ME: Who are your favorite actors?

Adil: My favourite Bollywood actor is Hrithik Roshan mainly based on Krrish and Dhoom (please don’t judge me hahaha)

And for Hollywood movies, I will have to say Nicholas Cage (National Treasure) and Simon Baker (The Mentalist). Favorite actress – definitely Alia Bhatt.

ME: Wow! That was such a free wheeling chat with you. I loved every bit of it and it truly looks like you are very clear in your dreams and direction. We all wish you all the very best and we are sure to hear more about you in the coming years.

Adil: Thank you so much to you too and we surely had a great time talking with each other.