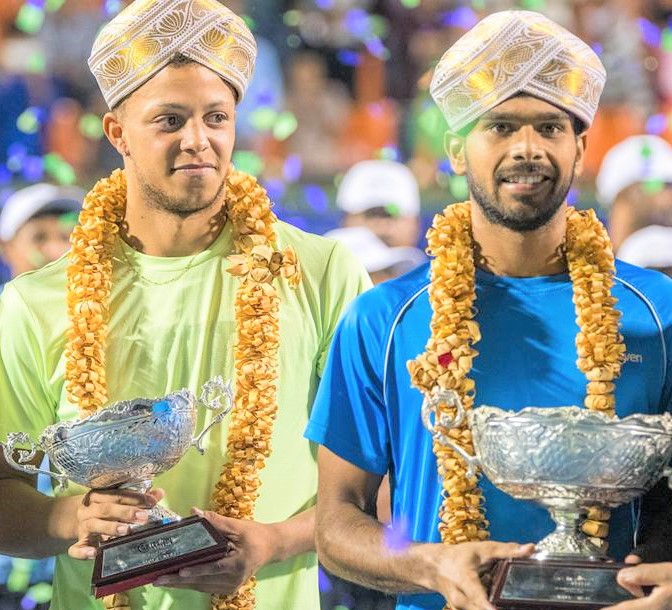 Sumit Nagal for long has been in the shadows of Yuki Bhambri and Ramkumar Ramanathan in Indian tennis. After winning the Junior Wimbledon doubles trophy in  2015 the spotlight had been on him. Not that he had been doing too bad in the Men`s circuit to start with but his over dependence on the ITF circuit for a longer period of time and not doing anything of note in the next level of Challenger tournaments was not very encouraging.

Coming into the USD 1,00,000 Bengaluru Open 2017 as a last minute wild card entry he shocked everyone including himself by being the champion. On his way he beat the top seed Blaz Kavcic in straight sets, ranked 102 in the world in the quarters. In the semi final he beat his in form senior compatriot, Yuki Bhambri in two easy sets. He in fact bageled Yuki in the second set to reach his first ever Challenger final.

In the final before a strong Bengaluru crowd, he showed that he has come of age. Against the talented Jay Clake of Great Britain, he showed that he can play the big points well. He was down a break in the first but to quickly recover and broke his opponent twice to take the first set. In a dog fight in the second set he lost it and it went to the deciding set. In the deciding set after being a break down he came strongly and won the set and the crown in a deserving fashion.

The effort has pushed him to his best ranking of 225 on  the ATP and can have a shot at the Australian Open, 2018 qualifiers. This has also made him the third best in the country after Yuki Bhambri and Ramkumar Ramanathan.

Somehow you could sense that Sumit came to Bengaluru on a mission and maybe a ‘secret’ one. He arrived early for the preparation and was found practicing hard with Saketh-Sai Myneni on the KSLTA courts. Also simultaneously he was giving great importance on his fitness under the watchful eyes of Yash Pandey at Peak Performance in Bangalore. Without a travelling coach, Yash Pandey who is also the physiotherapist with the Indian Davis Cup side filled in as a person who stood by him throughout the tournament.

Even when I asked his long time coach Mariano Delfino about Sumit, he opined that he is a top 100 material in the next two years. However even he did not give Sumit much of a chance at the open. Mariano told me that the next one year is going to be crucial for Sumit as he needs to work further on his fitness level and need a full time condition trainer.

Also read – What Sumit Nagal`s long time coach Mariano Delfino has to say about him.

Indeed Sumit Nagal with this victory may have just got the fillip to make the next jump.

Author`s views – With more work on his serve he can reach close to top 100 by end of next year. Also his fitness level has to go up. He was found struggling from the end of the second sets in his matches. However he is making a conscious effort to up his fitness level. We definitely can expect bigger things to come in the months to come.