Indian players at the Australian Open 2018 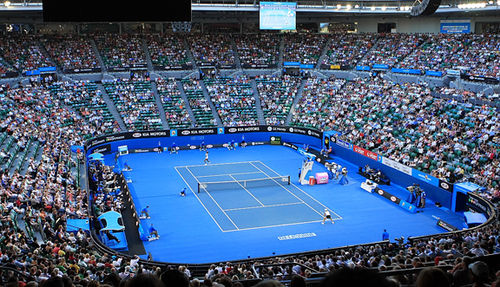 The Australian Open 2018 presented good opportunities for Indian singles players to play at one of the biggest stages of world tennis. What was good to see is that we had for a change 4 players who made the cut for the qualifying rounds. Even though only Yuki Bhambri made it to the main draw it was heartening to see the depth of Indian singles basket.

Let us have a look as to how did our singles players fare at the Australian Open 2018:

In the first round he met former Australian Open finalist, Marcos Bagdatis. Yuki definitely had a good chance coming in the match as Marcos Bagdatis is ageing and no more the player he used to be. Yuki had chances galore in the first set as he was serving for the first set at 5-4 but lost his serve and it finally went to the tie break. Even in the tie break he was up a mini break and had his chances as he squandered the chances and lost the set. After that Bagdatis with his experience carried him through.

2. Ramkumar Ramanathan – With a world ranking of 142,it gave Ramkumar a seeding of 28 in  the qualifiers. He won his first two rounds of qualifiers and thus for the first time entered the final round of qualifying in a Grand Slam. In the final round of qualifying he had his chances against the experienced Vasek Pospisil from Canada. In the deciding set he had his chances but eventually lost the match. However, it still remains his best ever performance in a Grand Slam.

3. Sumit Nagal – His superb performance towards the end of the year where he surprised everyone by winning the Bangalore Open 2017 allowed him to make the cut for the qualifiers at the Australian Open. This was his first appearance in a Grand Slam. He lost a tight 3 set  match against world no 160 Alessandro Giannessi from Italy. In the final set, he was up 3-1 before losing the set and match. However it can be visibly seen that Sumit is slowly but surely maturing as a player and we hope to see better things from the rest of the year.

4. Prajnesh Gunneswaran – Prajnesh Gunneswaran also made the cut for the qualifiers of a Grand Slam  for the first time. He lost to the ageing Tobias Kamke in 3 sets, a match I think he should have won. However the experience of playing in a Grand Slam qualifying round for the first time will surely spur him for better things in the months to come.